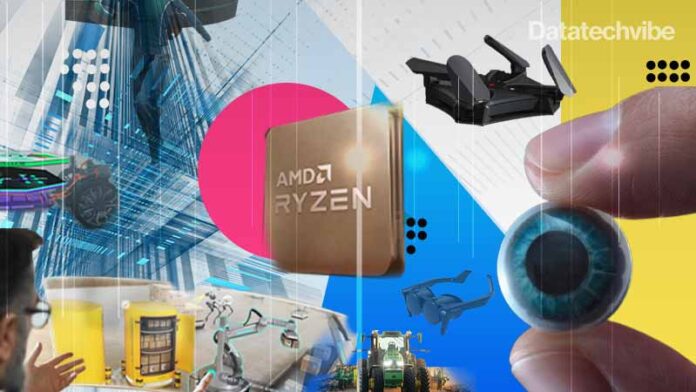 The 2022 Consumer Electronics Show (CES), featuring the latest technology innovations, held from January 5-7,  lived up to the expectations of being one of the world’s top-ranking tech shows and drew more than 2,300 exhibiting companies from all around the globe, featuring over 800 startups.

Artificial intelligence, automotive technology and digital health were among the key trends displayed at the CES 2022. This year’s event was held both in-person and virtually, with over 40,000 attendees attending the show in person. There were plenty of gadgets, apps, electric vehicles, smart-home appliances and XR glasses on display. Here are  the top highlights from this year’s event.

Nvidia is well known for its high-end PC graphics cards, and many of them have been on the expensive side for a while. But with the new RTX 3050, the company is now lowering the barrier to entry. This next-generation GPU will retail for $250, which is $80 less than the RTX 3060, the previous cheap RTX card. The RTX 3050 will enable driving 1080p video at up to 60 frames per second while supporting ray-tracing with Nvidia’s proprietary DLSS upscaling technology. Nvidia also unveiled another new GPU named “BFGPU”, the RTX 3090 Ti. Broadly similar to the standard RTX 3090, it can reach 40 teraflops of GPU performance versus the 36 teraflops of the 3090, making it around 10 per cent faster than its smaller sibling.

Somalytics, a nanotechnology startup, showed off its one-millimetre thick paper sensor, made up of carbon nanotubes and cellulose, that can be used for gesture control, health tracking, and eye-tracking products. The technology was developed at the University of Washington, and Somalytics is now attempting to commercialise it. Somalytics has already developed a couple of products using paper sensors; A SomaControl gesture monitor and the SomaSense 3D floor mat, which the company says could be used in health applications. For example, a sensor-filled floor mat could help detect conditions like Parkinson’s disease. Somalytics chief executive Barbara Barclay said that she envisions the firm making its own lightweight wearable with the sensors, in the form of eye-tracking smart glasses.

Amazon, in collaboration with Stellantis, announced its plans for a software ecosystem that integrates with customers’ existing digital tools and devices. The STLA SmartCockpit platform will be included in Stellantis vehicles starting in 2024. The platform will deliver applications for entertainment, Alexa-enabled voice assistance, navigation, vehicle maintenance, e-commerce marketplaces and payment services. STLA SmartCockpit will adapt to users’ behaviours and interests. Users will also be able to manage their vehicles from their Alexa-enabled devices at home or their Alexa smartphone app, such as heat the car’s interior before leaving the house or monitor their home through security cameras while in the vehicle. It will also feature an app store displayed through an intelligent, adaptive user interface that presents users with curated information and features.

TP-Link launched its new Archer AXE11000 router, boasting futuristic mechanical rotating antennas. Offering lightning-fast connectivity and support for the unique 6 GHz Wi-Fi band, this is as speedy as it gets right now. The four rotating antennas pinpoint your phone or laptop as you move, adjusting automatically to serve uninterrupted Wi-Fi everywhere in your home. TP-Link also displayed the quad-band Archer AXE16000, which combines 2.4 GHz, two 5 GHz, and 6 GHz bands for a staggering 16-Gigabits-per-second total. Ideal for large homes, this beast can handle 8K streams, VR, and much more. Archer AXE5400 promises to make Wi-Fi 6E more affordable, though TP-Link is finalising prices and release dates.

Wi-Fi 6E is coming to TP-Link’s Deco mesh systems later this year, but the Deco X55, a three-unit, tri-band, Wi-Fi 6 system, will supposedly launch this month. The X50 mesh series includes a waterproof outdoor router for the backyard and a router that doubles as a smart speaker with Alexa inside.

AMD announced a series of releases across its product range. The announcements were related to new mobile processors, desktop processors and graphics cards, along with enhancements to the company’s CPU and GPU software. According to AMD, the new Ryzen 6000 series mobile CPUs will appeal to gamers, content creators and users seeking thin, light laptops. Based on TSMC’s 6-nanometer (nm) manufacturing process and AMD’s new Zen 3+ architecture, the new chips support up to 24-hour battery life thanks to 50 new power management features, according to the company. Also announced at CES 2022 and available this spring, the new Ryzen 7 5800X3D desktop CPU is, according to AMD, the “world’s fastest gaming processor”, and will provide, on average, 15 per cent faster performance for gaming compared with the Ryzen 9 5900X.

Mojo Vision is continuing its development of smart contact lenses. The company showed its first look for the Mojo Lens prototype two years ago at CES 2020 when it was in the research and development phase. The new smart contacts use an embedded display to show notifications, serve as a teleprompter, and even help people with poor vision move about. The company announced that it is now exploring the sports and fitness wearable market as one of the key areas where Mojo Lens will be adopted first. It announced “several strategic partnerships” with fitness brands like Adidas Running, Trailforks, Wearable X, Slopes, and 18Birdies, and Mojo Vision plans to build “interfaces and experiences” to suit the needs of athletes in these categories. Athletes will not need to look down at a watch or smartphone screen to view real-time data but can see it during a workout.

ThunderSoft introduced its advanced parking technologies and solutions, ThunderSoft SmartParking. ThunderSoft SmartParking leverages cutting-edge ultrasonic and visual algorithms, the advantages of cross-domain HPC (High-Performance Computer), outstanding HMI designs, the latest generation ultrasonic sensor – AK2 and HDR surround camera to deliver seamless parking experiences in various scenarios with high efficiency. It’s advanced technologies can identify parking lines and output available parking space, with the success rate reaching up to 98 per cent . Even if the parking lines were blocked by other vehicles, ThunderSoft SmartParking could figure out reasonable parking spaces because of its powerful real-time planning and correction ability, plus superior exploratory decision-making capability based on the unparalleled ultrasonic and visual combined solutions.

Unity and Hyundai Motor Company announced a partnership to jointly design and build a new metaverse roadmap and platform for Meta-Factory. Through a signed MOU, Unity becomes a strategic partner to Hyundai, supporting its vision of becoming the leader in future mobility solutions. The MOU pertains to the fields of smart manufacturing, AI training and study, as well as autonomous driving simulation. The partnership will realise Hyundai’s vision of becoming the first mobility innovator to build a Meta-Factory concept, a digital twin of an actual factory, supported by a metaverse platform. The Meta-Factory will allow Hyundai to test-run a factory virtually to calculate the optimised plant operation and enable plant managers to solve problems without physically visiting the plant. Hyundai plans to first apply the Meta-Factory concept to the HMGICS facility, supporting the Group’s initiative to create an open innovation hub for research and development.

Panasonic has joined the VR crowd and announced  an ultra-lightweight set of Micro LED VR glasses. Called the MeganeX, the headset weighs just 8.8 ounces, and each eye has a Micro LED display with a resolution higher than that of the Oculus Quest 2 headset. The MeganeX also supports 6DoF head-tracking and is compatible with SteamVR, which means it packs high-powered games into a relatively compact headset. Although This is not a standalone piece of gear, meaning you’re going to have to tether it to a PC to use it. Over the past few months, we’ve also seen manufacturers tease shrunken versions of VR headsets (Project Cambria), wellness-focused goggles, and even a 12K standalone box for your face.

John Deere debuted a fully autonomous tractor at CES. The 8R tractor navigates its way around the fields using six pairs of stereo cameras, all powered by onboard machine intelligence software. Give it GPS coordinates and a good map, and it will find its way to and from the field on its own. And, of course, it can plough the soil and drop seeds all by itself, avoiding obstacles and collisions, even in darkness. Data collected by its cameras and sensors while its tilling will be used to hone Deere’s algorithms. Farmers can control the tractor remotely using a smartphone app, updating its route or giving it new instructions on the fly. The robotic vehicle rolls out to farms later this year.

Frontier.cool revealed the world’s first FPGA-based MPSoC (multiprocessor system on a chip) for the textile industry, based on FPGA (Field-Programmable Gate Array) hardware acceleration. The Fabric Meta Chip is a “dream team” collaboration between Frontier.cool and E-Elements. The Fabric Meta MPSoC uses Xilinx Zynq FPGAs with Arm processor architecture. The Fabric Meta MPSoC was developed to convert physical fabric into digital material, thus allowing virtual apparel to be designed directly from real-world textile fabrics,  expanding the benefits of virtual fashion and powering up the textile supply chain. This innovative world-first can be installed in textile and garment factories and fabric manufacturers to speed up digital fabric layer computation, facilitating the connection to 3D apparel design software and enabling the representation of the physical fabric in the virtual apparel or fashion space in real-time. The texture of the 3D material is high quality, high resolution, clear, and so realistic that it is challenging to tell the difference between the original material and the AI-generated material.