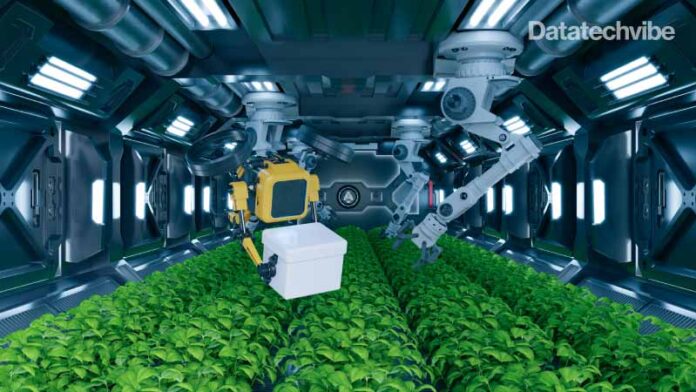 Today, according to the UN’s most recent estimate, there are 7.9 billion people — and we may reach 9.7 billion by 2050. This growth and rising incomes in developing countries are driving up global food demand, expected to increase anywhere between 59 per cent to 98 per cent by 2050.

What makes a daunting reading is about 8.9% of the world’s population — 690 million people — go hungry every day.

It’s been quite a challenge in recent decades in agriculture, declining investment in agriculture in most developing countries, growing demand for food, and dwindling natural resources, and is likely to become more complex over the next few years as weather patterns, available water and growing seasons shift further.

Against this backdrop, technology is increasingly being seen as a solution for boosting agriculture. Both agricultural giants and startups are introducing artificial intelligence (AI), machine learning (ML), internet of things (IoT), robotics, blockchain, computer vision and aerial imagery analytics, and vertical stacking to make farming processes more efficient and lead to better decisions for improving yield and productivity.

Technology is changing how farmers manage farmland, such as satellite-powered geo-positioning systems and sensors that detect nutrients and water in the soil. Intelligent technology is enabling tractors, harvesters and planters to make decisions about what to plant when to fertilise, and how much to irrigate.

As technology progresses, equipment will ultimately be able to tailor decisions on a metre-by-metre basis. Leveraging intelligent technology cuts down input cost by 40-60 per cent, thereby increasing saving and protecting the land’s fertility.

According to a Markets and Markets research, the AI in the agriculture market is expected to reach $4 billion by 2026, growing at a compound annual growth rate (CAGR) of 25.5 per cent, from $1billion in 2020.

Recently, agricultural giant Bayer Crop Science teamed up with Biome Makers to validate an automatised recommendation engine, using soil microbiome and environmental data, to optimise yield and soil health. Earlier, ML software allowed Bayer to predict potato yield improvement before the application of the input. The predicted result was a yield bump of up to 40 per cent in one of the fields tested in Idaho, US. This technology is a leap forward for those who, up until now, lacked the data required to accurately determine biological solutions for their seasonal soil and crop decisions.

AI is an ever-evolving resource and, as such, is applied to resolve other farming concerns as well, including questions about produce shelf-life, nutrient quality of the product, and projected carbon credits based on the use of different products or management practices.

The global agri-food supply chain is an inherently complex system. Of late, blockchain technology helps consolidate information on the seed’s quality, track how crops grow and record the journey once it leaves the farm. Grain Discovery, an online blockchain marketplace, is an example of data being leveraged by those involved in the food system to grow and market globally competitive crops. In 2017, Walmart carried out traceability tests on mangos and found that it took six days, 18 hours and 26 minutes to track it back to its original farm. By using blockchain technology, they could provide all the information to customers within 2.2 seconds.

According to the Future of Food 2040, on farms, technology will play an increasingly pivotal role, with nano-sensors collecting information on soil data and moisture levels, thus reducing the need to perform daily routine jobs such as checking fuel levels and temperatures.

The use of unmanned aerial vehicles (UAVs), or drones, for sensing and mapping will also become widespread, while robots will perform labour-intensive tasks such as fruit picking, milking, livestock feeding and even slaughter.

In fact, from drones to autonomous tractors to robotic arms, the technology is already being deployed in creative and innovative applications, automating repetitive tasks, thus allowing farmers to focus more on improving overall production yields. Harvesting and picking, apart from weed control and autonomous mowing, pruning, seeding, spraying and thinning, is one of the most popular robotic applications in agriculture due to the accuracy and speed that robots can achieve to improve the size of yields and reduce waste from crops being left in the field.

The US-based startup Root AI developed fruit grippers that can see plants and decide if they are ripe, spoiled, or growing, and navigate  vines to pick the ripe fruit.

Given arid climate and the water scarcity issues in the Middle East, and governments placing increasing emphasis on self-sufficiency, many countries adopt vertical stacking farming — hydroponics, aquaponics and other controlled environment systems.

Worldwide predictions suggest that the vertical farming industry will grow to be worth billions of dollars over the next few years. In the UAE, Emirates Flight Catering and US-based Crop One Holdings are building what they say will be the world’s largest vertical farm, producing 2,700kg of pesticide-free leafy greens daily, in Dubai. The many benefits of hydroponics, apart from the fact that it is grown without soil, sunlight or pesticides, is it uses 90 per cent less water than traditional open-field farming, and the yield is six times more from the same amount of land.

Using sensors to guide farming is the most significant trend in agriculture today. On the average farm that installed IoT devices, yields rose by 1.75 per cent, and energy costs and water use dropped. Smart devices can do everything from measuring rainfall to periodic testing of soil quality. Using the data from these devices, farmers know where to apply extra irrigation or fertiliser.

Since fields are location-based GIS software, using satellites and drones, is also becoming a handy tool in precision farming, as farmers can map current and future changes in precipitation, temperature, crop yields and plant health.

Such data significantly improves the accuracy of decision-making. GIS software also enables GPS-based applications in line with intelligent machinery to optimise fertiliser and pesticide application, where farmers don’t have to treat the entire field, but only deal with specific areas.

Belarusian firm OneSoil develops a suite of solutions to help the farmer using the satellite data from the Copernicus program, the European Union makes available free and open data collected from the Sentinel satellites.

Crop pricing, keeping soil healthy, frequent droughts and degrading soil quality are only a few of the challenges. If agriculture is to have any chance of answering these challenges, new and improved technologies is crucial. Combining breakthrough technology with the entire toolbox of precision agriculture and AI, a new future of secure and sustainable farming worldwide is achievable.